The out-pour of love and support from this group (really before I was "one of them") has been earth altering to me. I know people say that. And most people mean it. I don't mean it in a "I wasn't loved enough as a child so now I have internet friends" (because I was loved plenty, still am). But I feel like this is more than a group of just "internet friends". They baked for me before I really knew them. And the friendship has grown from there. Just a couple of strangers. Tweeting each other, reading a few blogs, then last year the first OKMH started and it was the first event of "more than just internet friends". I had a whole year of reading up on what the lovelies sent each other - so let me tell you that the pressure was ON! And then Jeanne sent me a box that was more "me" than even what I could have told someone to pack for me. The theme was Winter Essentials and she went above and beyond! Wanna see?? 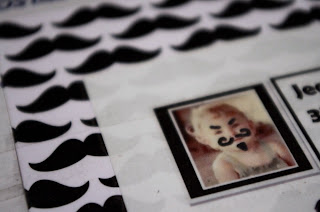 This is the first face I saw when I picked the box up. The lid was COVERED in mustaches. I knew it would get better inside. Also - how maniacal is that baby?? I practically couldn't drive back to our apartment what with being so giddy. 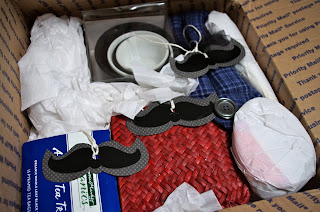 Mustaches. EVERYWHERE!! I started making weird yipping/squeely noises at everything. Hubs kept came over a few times to check on me, before just leaving the room altogether.


Y'all? The mustaches are tags! With notes!! They explained everything! I saved them. Because who knows when you'll need a large scrapbook mustache tag? You don't know that!!

For the record, I was not creeped out that she would creep around on my Pinterest. Frankly, isn't that we even have Pinterest?? She made the shirt, guys. Okay, she put the letters on it. I have been obsessed with this shirt. I don't care that I'm cutting back on coffee - it will always have a weird obsessive corner of my heart. /Tangent: my boss wandered past my cube with a cup of fresh coffee yesterday and I interrupted her mid-sentence to talk about her coffee. Woops. Single focus. /End tangent. I immediately put the shirt on (and the socks, honestly) before I unwrapped the rest of the box. It's really long (like a night shirt!!) so I was just playing with scrunching - don't worry, Jeanne!


Next up? Hand stitched neck-rice warmer in fleece. And because she was concerned about my office wardrobe, she even included a matching infinity scarf to go over it (I'm wearing both in the photo!). First of all, I love it. Second of all - awesome, right?!? Also - super warm. And, it's like a Northwest requirement that you wear flannel. It's like they send it to you with your "Welcome to WA" package. So obviously perfect.

Meet Tea-Rex. TEA-REX - GET IT?? I have laughed about this at least a dozen times. Practically every time I see the thing. It is a tea infuser! His little head pops off and the loose leaf goes in his body. There are holes along his back and head to steep. His arms are perfectly short. And a fully-intact Houston Starbucks mug (have you heard I'm obsessed?). There was also tea. For with to brew in the miniature dinosaur (*giggle*). The tea (pictured below) is a super tasty basic black tea. Each tea bag comes individually wrapped in a sealed pouch for maximum freshness. I have been trying to find it locally - because I will be adding it to my permanent tea rotation. 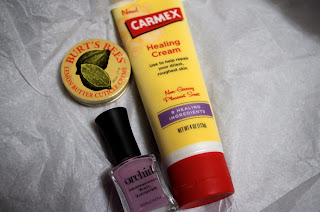 As far as winter essentials, this is as basic and utterly practical as they come. Basically my mitts have been impeccable since I got this box. Guys, if you need a good winter hands cream, the Carmax lotion is AMAZING stuff. I'm picky with my lotion because I have terribly dry skin and hate the greasy feeling... this absorbs quickly and lasts all day! I need to buy in bulk. I love this Burts Bees cuticle cream - I've been using it for years! And I'm a nail polish hoarder, so this is just perfect (have I said "perfect" enough yet?).

Also (as if that all weren't enough?) there were black and white prep bowls (in the back there) which I have used DAILY, and hidden at the bottom was a huge tub of sugary treats. Despite promising the Hubs that he would lose limbs should he touch anything, I have shared the treats with him. I've had most of them - but it was a huge box!! A huge, delicious box...

I know I've said it to her a few times over, but let it be written here in internet history - thank you SO much, Jeanne!!

For other Winter Essentials from the group, check out the other ladies:
Jeanne at Inside NanaBread's Head
Allison at Decadent Philistines Save the World
Mads at La Petite Pancake
Kirsten at Comfortably Domestic
Megan at Wanna Be a Country Cleaver
And Finally! See what I sent to Kat over at Tenaciously Yours
Posted by Kvetchin Kitchen at 4:00 AM