Dear Diary,
It's approximately 1:45 AM and I am awake. It's the third night (morning?) this has happened. Seeing as I've been home for nearly three weeks (illness, followed by surgery, followed by office closed and boredom), it can't possibly be jetlag.
Sherlock and Merlon and Good Eats are all on Netflix so at least I have something to do. Oy. I have pinned everything I can. I have sent pins endlessly. Facebook has been scoured. Instagram is caught up. And I'm hungry. This is really terrible. And I am getting more and more fearful of Monday when the real world strikes again.
Supplies are low. As is morale. I fear the worst. Send help.
The Case of The Giant Tonsils was resolved on December 15th. 2.5 weeks later, I'm healing well. But before that there was the The Strange Intense Pain That Sent Me Home Early from Germany. Oh and there was the work trip to Germany. So while I foolishly thought I could keep up with #Reverb14 under the influence of narcotic pain killers, the travel, the ER, the pain killers, and family time, I have fallen terribly behind.
No better way to bully insomnia when everyone else in this hemisphere is sleeping than to write a "Dear Diary" entry, right?
Half hour later, sleep is no closer to me. I suppose I'll go paint my nails or clean out a bin?
Sweet dreams, Diary.
Hugs and Kisses,
~Kvetchin 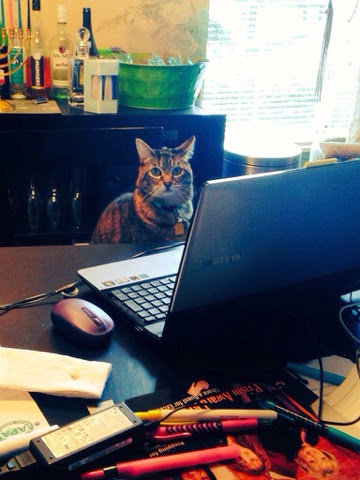 Posted by Kvetchin Kitchen at 2:31 AM No comments:

Do Over | Hindsight is the one thing we never benefit from in the present. Is there one moment you wish you could do-over?

Until recently, I am honestly sure that I was haunted by the past. I would go home at the end of the day and re-analyze almost every interaction. From emails, to casual conversations, to professional interactions.

But over the past year, something clicked and I am just not doing it as much any more. So when I think back to this year and try to consider what I would have done differently, I am not haunted by anything right now. Part of this may honestly be just that I am so busy and overwhelmed at work that I cannot spare the time to think on the past.

Of course I still have moments when I second guess myself, but there has been a shift. There is not one moment I would do differently.

I may wish for small moments when I could spare an extra breath to be a little kinder to those who care for me, may wish that I could call my family a little more, or may wish that I could balance work a little bit, but those may be the next shift in me. For now, I will try to enjoy the peace and quiet flowing from the self-critical corner of my mind.

Posted by Kvetchin Kitchen at 7:00 AM No comments:

Email ThisBlogThis!Share to TwitterShare to FacebookShare to Pinterest
Labels: Reverb14

Coulda woulda shoulda | What didn't you do this year because you were too scared, afraid, unsure? Are you going to do it next year? Or maybe you don't want to anymore?

I like to think that there's not much I avoid just because I'm scared. There were lots of things I didn't get to this year, but finishing/not finishing had far less to do with fear and so much more with brain cells and resources to spare.

The only thing that came close was getting my tonsils out. I was diagnosed with sleep apnea this year after undergoing a sleep study when Hubs had finally had enough of my night-time throat singing. The cure? Tonsillectomy. Now, this is not the cure for everyone, but I assure you my tonsils are so big that they almost touch on the daily, so this might actually cure it for me. But after lots of consideration, I nabbed the last appointment of the year!

Fingers crossed for a snore-free 2015!
Posted by Kvetchin Kitchen at 6:34 PM 1 comment:

Gorgeous | When did you feel beautiful this year? Why?

Okay. All my cards on the table: this was a rough body image year. In all honesty, this year's weight gain has affected me more than any my other bald years prior.

But I remember two nights in particular where I felt outrageous.

(1) Our 4-year anniversary in March. We made reservations. I wore a wig and a new dress. Hubs got me a beautiful gift. I was drunk on love before the alcohol kicked in. It was a rare evening together in between many weeks of travel and it was so wonderful to be engaged and focused on each other.

(2) Few months later, I found a coupon for a distillery tour and cocktail tasting date night. We made friends, made drinks, and ate a greasy bar burger before heading home.  After 50,000 miles traveled, this was a welcome break and so nice to stay with my man.


It was not until I started writing this down that I realized how much I define "gorgeous" by the quality time I spend with my husband. Yes, I feel pretty sometimes when I travel on my own.But I think "gorgeous" represents a centered mind, as well. My year was by no means centered or peaceful, but when I get to spend quiet moments with my man, he does have that effect on me.

Can I have my own identity, self esteem, and centered moments without him? Of course. I have and I will continue my own identity without him. But we are in a partnership together, and it's okay that he can be that rock for me, too. That may not be a very feminist sentiment, but this is my truth. And in this year where I traveled over 100,000 miles over this globe, it is comforting to let him have this peace over me.
Posted by Kvetchin Kitchen at 2:00 AM 1 comment:

Last year for December, I tried working out the posts with the Reverb community. I found it deeply inspirational, and am trying it again this year. I may find that I will post more this month than the rest of the year combined, but if I do, it will be because I need to work it out.

This year was a blur. January came hot on the heels of an emotional holiday season - The First after my grandmother passed. "The Hardest" "It's easier after this."
Sure. Okay. If you say so.

In January I was struggling. I was deeply dissatisfied at work. I had two new bosses that I wasn't quite used to yet. I was personally in a better place after blogging through some feelings in Reverb last year, but generally I remember feeling aching in my heart and soul.

I was desperately ready for a change - in my job, in my outlook, in anything. Even if it was more plainness in my life. I did not get plain or even normal. But this December, 11 months later, is worlds brighter than January in all ways.
Posted by Kvetchin Kitchen at 9:29 PM No comments: